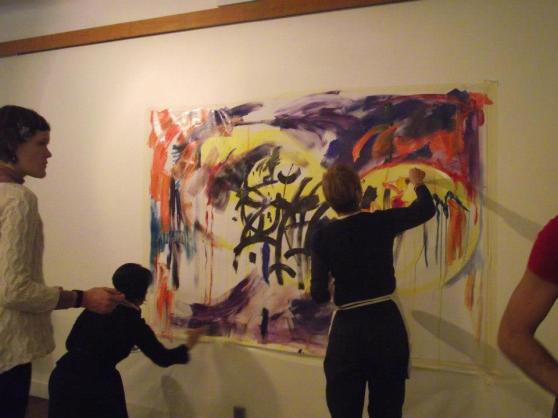 I am applying to participate in an artistic retreat at Wysing Arts Centre, in Cambridge. To make this application I need to propose a workshop. There will be a lot of brilliant applicants and I am unlikely to secure a place, although I would really like to go. The retreat is on theme of “Tracing the Tacit”. My proposed workshop needs to be on one of the sub-themes of Entropy, Chance, Disorientation or Silence. I have chosen Entropy, and propose an edition of David Black’s marvellous Tunisian Collaborative Painting workshops. Please look at my proposal and tell me how I might improve it. The deadline for applications is the end of this week. For more details, see:

This is a participatory performance exercise in which I gather individuals at ‘Escalator Retreat 13’ together as strangers who meet, collaborate and create a painting. This collaborative experience interprets the concept of entropy, meaning inherent disorder and friction, as a necessary stage in the development of a process, namely art-making, that then provides a restorative and replenishing social act.

‘Tunisian Collaborative Painting’ is an art form that was developed by Hechmi Ghachem in the 1980s, responding to the dictatorial government and oppressive political regime in Tunisia. It allows a group of people (artists or non-artists) to work simultaneously on a canvas without discussion or planning, following a simple set of predetermined rules. As a consequence, the process of painting involves strangers meeting and creating together in a way that enacts the disorder of their random alliances, as posed by their gathering at Wysing. The canvas becomes a meeting point for these public performers, who, whilst painting together, embody and situate the arguably lonesome, marginal, starving edges of a society. The canvas and its occupants become an Augusto Boal-ian Theatre of the Oppressed, where different cultures, identities, opinions and styles come together, whilst strangers meet and work through their sometimes opposing viewpoints and visions. This process then responds to divergence with an economy of contribution, rather than capitalism, and a truly democratic constitution.

This worthy political effect occurs during my workshop as a result of passing through the entropic, chaotic visual mess of individuals’ random and differing marks in the canvas. Since any person can paint over or change another’s marks and create an entirely different effect, the painting process might become a violent act, which produces disorder in the closed system of the shape of the canvas. However, as no single person is responsible for the whole composition, there is the elimination of desire in the creative act. There is no ego, and from the collaborative experience (with its necessarily entropic process) a painting created by a group of individuals resembles the work of a single artist. Thus, instead of the unravelling of the order of a system (i.e. the canvas) into inherent disorder, the expenditure of energy that occurs whilst each participant puts marks on the canvas, and their collaborative teamwork, results in a an efficiency for this system, which can now express both the individuality of each participant and their unity as a whole.

In this way my workshop will show how order can only be produced by increasing entropy; just so the final painting, with its cohesion, can only occur as a result of the chaotic, aggressive and entropic process that occurs whilst making it. As a result, we will discover that disorder is only a limited perspective of order, and vice versa, whilst passing through entropy is a necessary stage towards one and the other. Meanwhile, participants discover a new way of working together and create an artwork that testifies to their different identities and the ways that these congregate at Wysing.

The participatory workshop of ‘Tunisian Collaborative Painting’ I propose for ‘Escalator Retreat 13’ represents a timely culmination of my artistic research into Making Sense. This is an expanding collective of artists and thinkers who have gathered in response to my research and art practice, to develop an act of reflection that is at once sensual, conceptual, accessible, and interdisciplinary. I organize annual colloquia that found a junction between theory and practice, in collaboration with philosophers Jean-Luc Nancy (in Cambridge), and Bernard Stiegler (at the Centre Pompidou in Paris) with Elaine Scarry (at Yale), and this year we are holding the event at The Metropolitan Museum, New York, with Robert Storr. These colloquia draw together professionals engaged in the worlds of art, philosophy, critical theory and psychology to provide live source material for invigorating debate and creative research, forming an interface between artistic creation, theoretical debate, and academic scholarship.

At last year’s colloquium I collaborated with David Black, an American painter who highlighted the significance of Tunisian Collaborative Painting at a pivotal time in the Tunisian Revolution. We held two Tunisian Collaborative Painting workshops, where participants discovered a diplomatic sense that translated across their different, disordered and divergent ways of thinking. This experience showed me how such an activity, of directing strangers to paint together, could develop and disseminate a language and semiotics that is diverse, creative, transformative, and inclusive. This practice then demonstrates how art-making can be used as a means of responding humanely and critically to social crises and traumas – the living reality of the inherent disorder and conflict that defines the entropy that besets our very being-in-the-world. This is the mode of ‘real’ that I bring to Tracing the Tacit: my workshop of Tunisian Collaborative Painting poses a diplomatic and regenerative response to the ‘universal’ law of perpetual decline.

I need to take part in Escalator Retreat 13 to bring to fruition my ongoing artistic scholarship with Making Sense, make new connections, collaborations and prove how this is possible through the process of making art.