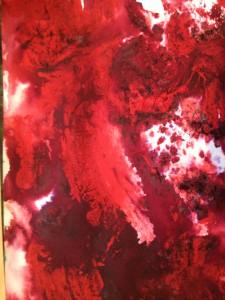 So I came out of it, eventually, with a distinction and a job. These were my intentions, which I would never have been able to achieve had I not gone through the angst and judgement of the MA degree. This course was in some ways more difficult even than it had been to do a PhD at Cambridge University. Going to ‘the other side’ of town, no gown, at the polytechnic, you’d think it might be a doddle.
However, I had never studied art before. Roused only by passion and belief, it was quite a different thing to enter an education, at Masters level, with inadequate talent and experience (I came to see).

Nevertheless, I enjoyed the constant challenges that studying for a completely different kind of degree offered me. I grew in new, unforeseen dimensions. It was exciting to give birth to art that was my very own – new, nude, bizarre, deeply personal and totally experimental. I learned how to use new mediums, such as analogue film, installation and performance. 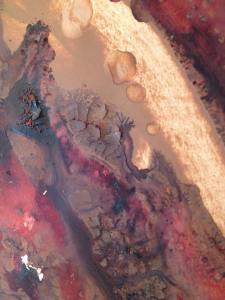 I went a long way away from the equine archetype of Stubbs, once a muse a lifetime ago. I also did things that were completely unexpected. What my parents would call ‘avant g’arde’. They would then say that they didn’t understand what it meant. Missing the point, but still having a point.

Since I did not actually do very well. And I come out of the degree feeling far less of an artist than I did going into it. This is because, I feel, once an artwork is assessed, criticised and judged, then graded, marked and given a percentage, this process of metric evaluation and the eternal damnation it puts down in black and white, then destroys the artwork (and the artist). It is no longer art once it has been judged and marked.

Gaining low marks on my initial works, which were voluptuous and massive paintings (throwing plaster on the walls) made me decide to give up painting. I still paint, as you can see, but only privately from now on. Ever since the lecturers demolished my paintings by marking them downwards.

Gaining low marks on my final work, which was the most personal and deeply meaningful piece I have ever made (and quite a triumphal achievement to be able to make it at all, I thought), made me angry. These marks, and the comments I received, also removed my right to call myself an artist. As one of the lecturers said to me (informally, and I paraphrase), ‘You’re an academic, not an artist.’ I left a wire showing in my installation. There were ‘tensions’ and ‘internal struggles’ evident. I did not do a good job. 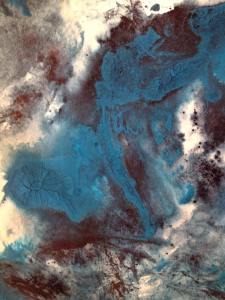 But I did do a good job. This work epitomised the triumphs I have achieved in my basic life. I am sorry that it is wrong to express these triumphs, and to find the meaning in my own story so important to tell. But it is still important, even if you don’t think it makes good art. What right do you have to say that anyway? Why does your subjective taste matter?

As you can see, I’m still a bit angry. But I still got a distinction anyway so I really should let that go now…… What have I learned from doing this degree? I have learned that I do not want to mark or judge art. I do not want to break students’ hearts by criticising what they produce. I do not think this is kind.

I went into the degree thinking that I wanted to teach in an art school. I come out, with a job in the school across the campus, Media and Film, realising that I am better equipped to teach people about art, rather than judging art itself. I am now teaching critical theory, film, philosophy, deep ideas and such. More like what I was studying for my MPhil and PhD. I’m really enjoying this. I also feel welcomed and valued, which is strange, but comforting. 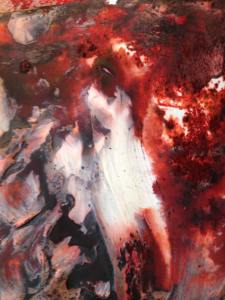 I’m not saying that the MA Fine Art was bad, or that I wouldn’t advise people to do it themselves, it’s just that the greatest thing I learned during this course was its apparent demise: once an artwork is judged or marked or graded, it is no longer art. It becomes that mark or grade, and nothing else. This can destroy the artist, who then (in my case) destroys that art, which never made the grade.

In the end I did make the grade, and I got the job. But the process still destroyed my burning need to call myself an artist. I will always be an artist, privately. And not so privately, since I am doing a performance in Australia next week. But according to comments I received on my performance in the MA Fine Art degree, I’m not really an artist. I’m an academic.

It could be worse and it doesn’t really matter. I mean, it does matter of course, I’m always trying to work out who I am. I can never work it out. I guess, still, I’m schizoaffective. Rhyzomatic. Oh look! I’ve gone into concepts! How academic!!

The art is there too. And always will be. With the horses! So things are good.