The pulse of prāṇāyāma was a magical experience. Lots of people came and participated in both studios – the hot space for the yoga practice, and also the meditative space. The soundtrack of my heartbeat was momentous. I shall describe the whole day.

Firstly I went to Sainsburies to buy about 20 bags of fruit and 4 huge cartons of juice for participants to eat and drink. It was extremely heavy to carry 6 full shopping bags to the yoga centre. A workout! I put it in the kitchen and then took class. My organisation and setting up for the event did not begin until 3.30 so there was time for me to print out the press release and try to make myself look more presentable.

At 3.30pm precisely Theo and I began to set up the yoga studio. My big posters were placed on the doors of the building, outside the studio. I washed and prepared the fruit and juice. Theo fixed the technology for playing the sound in both studios so that they could both run at exactly the same time. I would press play when the people practicing had finished pranayama breathing, and the sound would be heard simultaneously in all areas of the yoga centre. I cleaned windows, we set up the space, and did odd jobs (not so odd, but normal setting up activities).

Then at 5.30pm people started to arrive. My friend Julia Johnson, our professional photographer for today, was one of the first, and she got out her camera and did some test shots. Soon the yoga practitioners turned up and prepared to start the class. Several people had never done Bikram yoga before. They wanted to come and practice because they were interested in my artwork. It was great that my art was attracting new people to the yoga centre, and I felt thrilled that they wanted to experience The pulse of prāṇāyāma. There were lots of familiar faces, also. Lots of friends rallying around to support my work. I was very grateful.

Then, at 6pm, we started. I went into the hot room and gave a short, spur-of-the-moment talk to introduce my project. Then Theo began to lead the practice. Meanwhile several people had entered the other studio and lied down on the mats and bolsters. They put eye pillows on and sank into the floor. I explained that the sound would not be played immediately because we had to wait until the yogis had finished the preliminary exercise of prāṇāyāma breathing.

Then it was time to start the sound. I pressed play. Boom boom boom! The sound kicked in. It was momentous, vigorous, powerful and compelling. I think I can say that, can’t I? I was ‘in charge’, so to speak, outside of both of the studios. People kept on arriving. Julia’s family came. So did my old doctor, the one who diagnosed me by analyzing my paintings. It was such a pleasure to see him and show him my work. I felt proud. He was thrilled to see me looking so well and it was amazing to be able to talk to him as a healthy woman, as an equal, rather than a sick and disabled patient.

People in the meditative space lay down and most seemed to fall asleep – fully absorbed by the artwork. This was exactly what I had hoped would happen. The hot space was viewable because we had left the glass door open. It was amazing to watch people practicing Bikram yoga – I have done it so many times but never watched it before. They practiced the same routine as normal, but with the soundtrack of my heartbeat. Their practice, and the oscillation of their own heartbeat, echoed the sound they were hearing. Sweat poured down their lithe bodies. It was so dramatic and powerful to see this happen.

Other people arrived. Julia took some amazing photographs. Time dissolved. Soon the end of the recording came upon us. I could not wait to hear the practitioners’ comments on their experience. They walked out of the hot studio with sweat pouring off their bodies, red cheeks, bright eyes and wet hair. Beaming.

The overall opinion was extremely appreciative and interested. This was a participatory kind of art. People had to contort their bodies and enter my installation. They themselves made it a performance – in both spaces. The resulting performance-installation was a collaboration – between me, Theo and Jennifer (in organizing it and putting it on at the yoga centre), and also between me and all of the people who experienced it and helped to make it happen by participating last night.

Theo, in particular, said he was overwhelmed by his practice. He had lead the whole class – changing posture at the appropriate time (which I had worked out and written down for him. He also had a stopwatch so he knew when each posture ended and began). People were copying him. He said he needed a few days to decompress and respond to this transformative experience. It had been the most powerful session of Bikram yoga he had ever done, he said. I was extremely touched by this reaction to my art.

My friend Andrew also practiced the yoga. He also said that he had had a transformative experience. Taking the class with my heartbeat had made him think about life and existence. Several other people said that it had been a very moving active performance. They felt enlivened and touched by this participatory, extreme form of art.

My tutor from Anglia Ruskin, Veronique, came. She was a critic, assessing the exhibition for a module I am doing as part of my MA. She also seemed game to experience the art in itself, besides marking it, since she lay down in the meditative space for a long time and really immersed herself into the work. She also stayed to hear people’s reactions from the hot room, and wrote a lovely long comment in my comments book. I was grateful for her effort to come and experience my work, and I hope that she thinks that it was a successful site-specific exhibition. I hope I get a good mark.

But, besides and way beyond that, it was a successful event because everyone engaged with the installation-performance and came out of it with fascinating comments about their experiences whilst participating with it – in both of the 2 spaces. These experiences ranged from sinking into the vibrating floorboards and falling asleep, to meditating about existence, to feeling their own heartbeats follow, echo or differ from the recording.

Zeynep suggested I play it at other places. I should contact the yoga studios in London – perhaps Michelle at Fierce Grace? There is life for my heartbeat beyond its première at ETHOS. This is exciting. I certainly intend to engage with the same theme and technology for my MA major project at Anglia Ruskin.

I left a comment book on the table. After people had dried off and had a drink, they wrote down their thoughts in this book. We spent a while socializing in the studio. This was a dreamy time. I wasn’t tired, just absorbing the few remaining minutes of this wonderful event. I had an amazing time collaborating with the people who run the yoga studio. It was very different to showing work at a gallery. There were different concerns to deal with about organization – setting up the hot room for the yoga class, setting up the meditative space for the other part of the exhibition, and working out all the technology for playing the recording.

My audience – I mean, the participants – were mostly yogi-fanatics. But there were also some people who practiced in the hot room that have never done yoga before, and others who came to purely engage with the meditation. Participants were open-minded about considering their practice at this event as a work of art in itself. They appreciated my heartbeat as an installation artwork in itself, and they saw themselves as collaborating with this installation whilst they were performing in tandem with it. The consequent performance-installation was powerful and – for some – overwhelming.

There is much more to debrief, decompress, and take from The pulse of prāṇāyāma. It was a dream realized and made true. My truth. My heartbeat. As I said to the participants in my spur-of-the-moment one minute speech before it began, my aim as an artist is to ‘Seize hold of life’. This is a quote from Gilles Deleuze, whose Logic of Sensation guides my academic opus. I want to seize hold of life, but it is ever impossible to capture and will always run away, ahead of me. My art tries to express and sustain some part of this futural duration, so that I do not lose any further part of my existence. This aim comes from the time when I had total amnesia (after a chronic head injury and brain damage, from which I am now fully recovered) and lost everything. I’m trying to grasp hold of life so this never happens again. I realize that it is not possible to capture the essence (or any part) of existence. I can’t tie it down. Hopefully they won’t tie me down again. Let’s not tie anything down! But to express and sustain the glorious qualities the life presents, in its dazzling, synaesthetic beauty, is the point of being alive.

The pulse of prāṇāyāma is a recording of my heartbeat. I have it set. I can play it again. I will show it again. This does not tie down my heartbeat (so it can still keep on beating), but it means that a part of me has been chronicled and will remain beyond the singular event of this recording being played.

It presents, in part, something very personal – the noise of the motor that pumps my blood and feeds my organism. Turning this noise into a performance-installation has enabled me to express the rhythm and drive of my being. It is a tactile sound that beckons participants’ own hearts to correspond, until there is an equilibrium as everyone’s hearts beat together, in time to the exertive heat and exercise of Bikram yoga.

I should now criticize my exhibition. The meditative space was a bit cold. I should have bought more strawberries, and not so many tangerines.

But it is perhaps more useful to think about what I can do next with this artwork, and how will it influence my future works? I plan to record other sounds of the body, at rest, and in other forms of hot yoga (Fierce Grace, perhaps). I will contact other yoga studios in London and discuss the idea of taking The pulse of prāṇāyāma on tour and making other works around the same theme.For my MA Fine Art at Anglia Ruskin, I’m going to focus on the tactile quality of sound and make an installation which provides a tactile rather than purely sonic sensual experience. Sound that touches. This idea stems from the tactile hallucinations that I once experienced as a result of my brain injury. I want to reinterpret these psychotic incidents in a different light: reconstructive as opposed to destructive; nourishing and sublime, rather than punitive and desperate. I want to advocate an opportunity for touch that brings healing, new life and care. I hope to do this by engaging with recordings from the sound of my body functioning, and playing them at a low level bass, until they become tactile rather than purely auditory. These sounds touch the viewer, who enters and feels cocooned, held, softly hugged by this experience.

It would be great to show you the wonderful photographs that Julia Johnson took of the event. But I can’t yet — I’m waiting for permission from ETHOS. Here’s one of me, looking so content to have made art that touches people (one of my life aims): 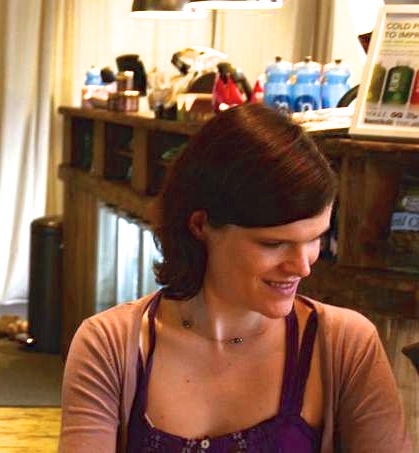